I have been building CNC routers for almost 6 years now, I have built 5 machines for myself, and helped a couple of people finish theirs.  The results have been mixed, the Rockcliff machine was a good machine given my skill and budget at the time.  The Black and Yellow Beast was interesting and worked fairly well, and the Son of the Beast 1×3 machine came out very well.  The larger 2×4 Son of the Beast was OK, but the expected improvement over the Black and Yellow Beast was not as great as I had hoped and it was overly complicated.  I started a large (4×8) Unistrut based machine that died before completion.  The next machine (unnamed) was an effort to simplify and resulted in a sturdy machine that is limited in cutting height and dust collection. I have had fun (mostly) building these various machines and have spent enough to have built a really nice machine, so you would think I would give up and just buy something by now.

Well apparently I still haven’t learned my lesson.  The whole reason I started my own design was to build the kit I would have like to have had, and even though we now have new shiny things to play with (3d Printers and CNC Frickin Lasers), I am still plunking away at building an easy to build, cheap cnc router.

So drawing on the words of  Thomas A. Edison

“I have not failed. I’ve just found 10,000 ways that won’t work.”
“Many of life’s failures are people who did not realize how close they were to success when they gave up.” 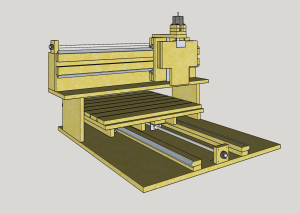 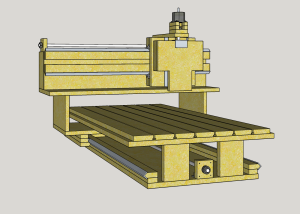 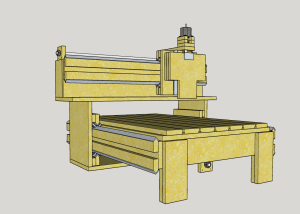 … So this post has been sitting as a draft for almost a year, in that year I have built a prototype of the Flying Gantry Design 1 and drawn up a combined set of plans for the Moving Table Design 1 and Flying Gantry Design 1 that I am going to try to release very soon.  I did post sporadically to my Google+ Page, so if you are interested in a few build pictures you can find some there. 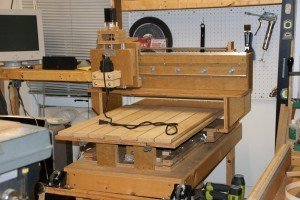 My short term goals are to post the plans, post a more detail build entry with more pictures and a cutting video, build the moving table version and document the process, and finally present the plans and the 2 machines at Maker Faire Atlanta. That’s a bit to accomplish in a short period, but historically August to October is my most productive garage time of the year, so here’s hoping.