So right after the last post I did a bunch of work in about two weeks and was to the point were I was just about ready to run, and then nothing…  this update has been sitting in draft mode for 2 weeks so I decided to force myself to finish it tonight, so here we go.

The first thing I decided I needed to do was to wire up and test the surplus motors I bought.  I used  22ga  4 wire security system wire I found out home depot, I used this wire on my two previous machines without any issues.  Using the documentation over at the Lin Engineering site, I was able to easily wire the motors up as bipolar parallel.

Then with a bit of remorse, I reclaimed the electronics from the Rockcliff Mini Model D, removed the extra parts (4th Axis – Probotix side step and MDFLY breakout board) and wired it all up to the remaining Xylotex 3 Axis controller.  After making the necessary changes to the EMC2 configuration, I ran a few quick tests and everything just worked… this is the first time that has ever happened, but I guess 3rd time is a charm after all. 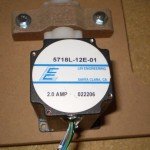 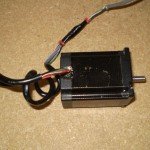 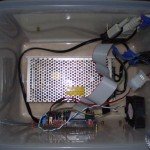 Next came the couplings, and  I opted to make another attempt at DIY Couplings.  This attempt was made from from 1/2″ brass bearing sleeves and some 1/4″ aluminum tubing left over from the first attempt.  The surplus motors I bought have a 1/16″ hole on the shaft and no flat so I decided to just use pins (spring/tension/roll… whatever you want to call them) on everything.  I made use of a Harbor Freight Self-Centering Drill Press Jig to get the holes centered, drilled and attached each piece in secession.

First I drilled the 1/16″ hold in the 1/4″ aluminum tube, which I then super glued  to the brass sleeve.  Once the glue had set (aided by a heat gun), I drilled a 3/32″ hole and tapped in a tension pin to secure the tube to sleeve bearing.  I then used hot glue to attach the coupling to the lead screw,  this actually worked better than I expected and by spinning the coupling  on the rod after adding the hot glue, it went on remarkably straight.  After the hot glue set up, I drilled a another 3/32″  hole and tapped in another pin to secure the coupling to the lead screw, it actually came out very well.

Next was to attach the couplings to the motors…  this turned out to be harder than I expected.  The 1st one went on easily, but I had issues with the 1/16″ pins bending on the next two, and actually broke the pin on the last one which was very difficult to get out.   I ended up destroying a 1/16″ hex wrench I used as a punch to remove the offending pin, but I was able to get it out and drive in another one.  I say this every time, but next time I am going to just buy some couplings… no really. 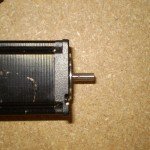 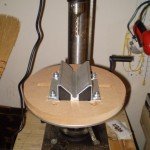 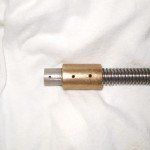 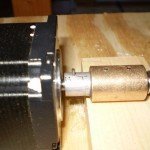 Mounting the motors and lead screws was uneventful, and by playing around with the EMC2 settings I was able to the Y and Z axis running at 42 IPM and the X at 54 IPM, so things were going well. However when I did some additional testing about 3 weeks later I had issues with the X and had to back it down to 42IPM…  and the Y axis has developed a clicking noise which I traced to the flexing of a coupling due to a slight bend in the lead screw… it doesn’t seem to be hurting anything, so I have decided to run with it for now.  I am sure if I purchase good drive components I can probably get better speeds, but I really want to save my money for multi-start screws and anti-backlash couplings for the retrofit of the big machine.  I may see what I can find on EBay. 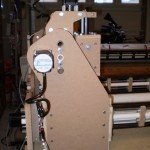 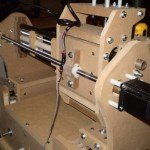 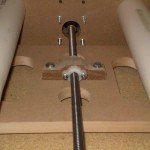 I then put the table on and immediately noticed an issue.  On the previous build I was able to use C-Clamps on the edge of the table to hold stuff down, however I failed to consider this when I added the 2″ PVC pipes for spacing the end boards and there is not enough clearance under the table to allow of the clamp screw.  I made the decision to keep going,  but I have updated that cad files to fix the issue. 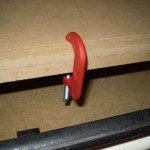 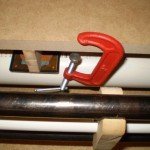 Next up was table supports.  On the last machine I used EMT conduit, but it was not idea so I was leaning towards using wall mounted shelf runner.  I was also playing around with making some supports that would sit on top of the 2″ PVC pipes and be held in using 1/4″ threaded rod.  I ended up doing this, but opted to glue the supports directly to the bottom of the table.  I had to shim between supports and the PVC pipe, but it seems to work fairly well. 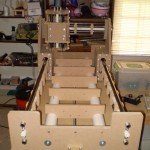 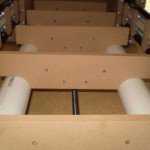 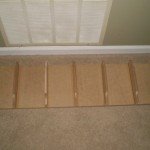 On to the router mount.  Once again cannibalizing the Model D, I pulled the DW660 router and created a modified version the mount I used on the Model D and incorporated a version of the vacuum shoe from the Black and Yellow Beast. While doing this I determined that the table is probably too low and it would be nice to have another inch or so of clearance  between the bottom of the Y/Z carriage and the X pipe runners.  So I changed the mount so the router hangs down an additional inch, and modified the plans to raise the table 2 inches and the Y/Z carriage an inch. 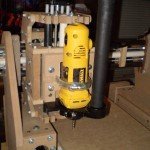 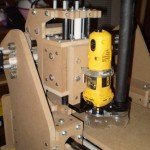 And that is pretty much where things stand at the moment.  I need to determine what clamping method I am going to use, and then I should be cutting… something… not sure what…  hmmm… 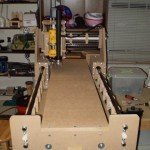 ← 2 Week Progress Report
Clamping and first run of the BS1v2 →

One Response to 6 Week Progress Report